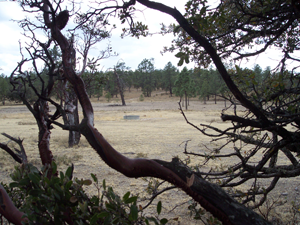 The part of the world that the Gould’s wild turkey inhabits is very arid and mountainous.  The areas receive around 18 inches of rainfall per year, with the bulk of that coming during a short period of time from July through September.  The remainder of the year is quite dry except that some areas where the elevations are high may receive some snowfall.  This makes water a key element in whether or not an area has Gould’s turkeys on it.  Many landowners in the areas that are native for the Gould’s turkeys build dams and guzzlers for not just their turkeys but all of their wildlife.  During the dry times of the year, the turkeys never wander too far from a water source, and this makes water sources very productive hunting spots.

There is still a great deal of research being done on the Gould’s wild turkey habitat, its breeding habits, and the bird itself.  This research is a cooperative effort between federal governments, state governments, biologists, and private landowners, and it is a continuing work in progress.  As new information is released regarding the Gould’s wild turkey habitat, I’ll publish it here.

Since so few turkey hunters in the United States have an opportunity to hunt Gould’s turkeys in the United States, booking a Gould’s hunt with a trusted outfitter is extremely important to the success and enjoyment of your hunt.  Be sure to check references and ask those references the questions that are important to you.  After all, the hunt you book will be your hunt, and since we all have different goals on a hunt you need to be sure that your goals in a hunt have the best chance of being met by your outfitter of choice.  Click here for a list of questions that you may want to ask a reference or an outfitter before you book your hunt of a lifetime.