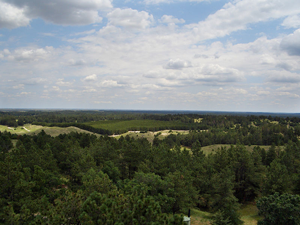 Merriam’s wild turkeys live in the mountain ranges of the western United States in the forests of Ponderosa Pines, Pinyon Juniper, Gambel Oak, oakbrush, and Cottonwoods.  Much like the Rio Grande turkey, the Merriam’s wild turkey prefers mostly open areas so that they can keep a watchful eye out for predators.

Typically, Merriam’s turkeys will migrate according to the seasons.  Merriam’s wild turkeys will move to lower elevations in the winter in order to avoid the heaviest snow fall which makes feeding much easier.  Farmers in the western US often report seeing flocks of 100 – 200 Merriam’s feeding near their grain bins and hay barns during the winter as the turkeys seek out an easy meal.  As the weather begins to warm and the snow begins to melt, the turkeys begin to move into higher elevations, where they will nest among the steep slopes of the mountainside.  This nesting behavior is believed to be a protection against nest predators.  Keep this nesting behavior in mind as you hunt late season gobblers looking for hens.  After the poults hatch from their eggs, the hen and her brood move into the forest meadow edges and open overstory forests that allow for undergrowth as the food sources are unlimited there.  Most hens with poults will rarely get more than 30 – 45 feet from the edge of the meadow, and they prefer to have a shrub thicket or a forested overhead cover source close by as well.

Merriam’s turkeys most commonly use a Ponderosa Pine or a Cottonwood as a roost tree, and they will typically roost very close together during the spring as well.  You don’t see a whole flock roosted in the same tree as you do a Rio Grande, but it is not uncommon for a flock to be roosted in 3 or 4 trees in close proximity.  Merriam’s also roost at or very near the tops of the mountain ridges.  Suitable roosting habitat is essential in promoting a healthy population of Merriam’s turkeys.  The NWTF has its Northern Plains Riparian Restoration Initiative to help enhance riparian habitat in the Northern Great Plains by removing invasive plant species that use a great deal of water, like salt cedar.  The NWTF also has its Operation Big Sky program to enable chapter volunteers to plant mast producing shrubs, provide standing grain for turkeys, and help ranchers who have large numbers of turkeys on their ranches during the winter months.  This program has helped enhance almost a million acres for wildlife in Oregon, Washington, Wyoming,  Idaho, Nebraska, and North and South Dakota.

Another extremely important feature that Merriam’s wild turkey habitat in the West must have is water.  If your property does not have adequate water during the summer and fall months, then you may want to consider building several ponds, water catchment areas, or guzzlers on the property to help not only the wild turkeys survive a tough drought, but also other wildlife.  Because Merriam’s wild turkeys have such a flexible diet, most areas in the western US have suitable food sources for turkeys.  So, if you can provide year round water sources and good roost habitat, then you should be able to have and keep Merriam’s turkeys on your property.