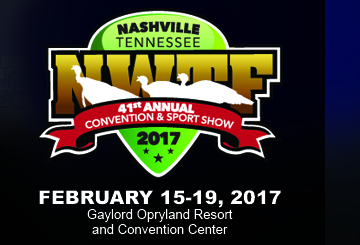 In this week’s episode, I recap the 2017 NWTF Convention and Sports Show that took place in Nashville, TN.

With what is sure to be a record breaking crowd in attendance over the weekend, thousands of people enjoyed seminars, calling contests, and an exhibition hall full of vendor booths selling anything from shotguns to turkey calls to headnets to cover a turkey hunter’s face.

While all of this excitement was going on in the convention and sports show, I was wandering around recruiting people to let me record an interview with them.  This interview was one with a twist – it consisted of one question.

The real trick to the one question is that there really was not one answer, and there certainly was not one right answer.  I strictly wanted to know “What is the one thing that elevated your success level in the turkey woods from that of being a beginner to where you are consistently killing turkeys year in and year out?”

Listen in and enjoy the 2017 NWTF Convention Recap and my one question interviews with attendees of the convention.