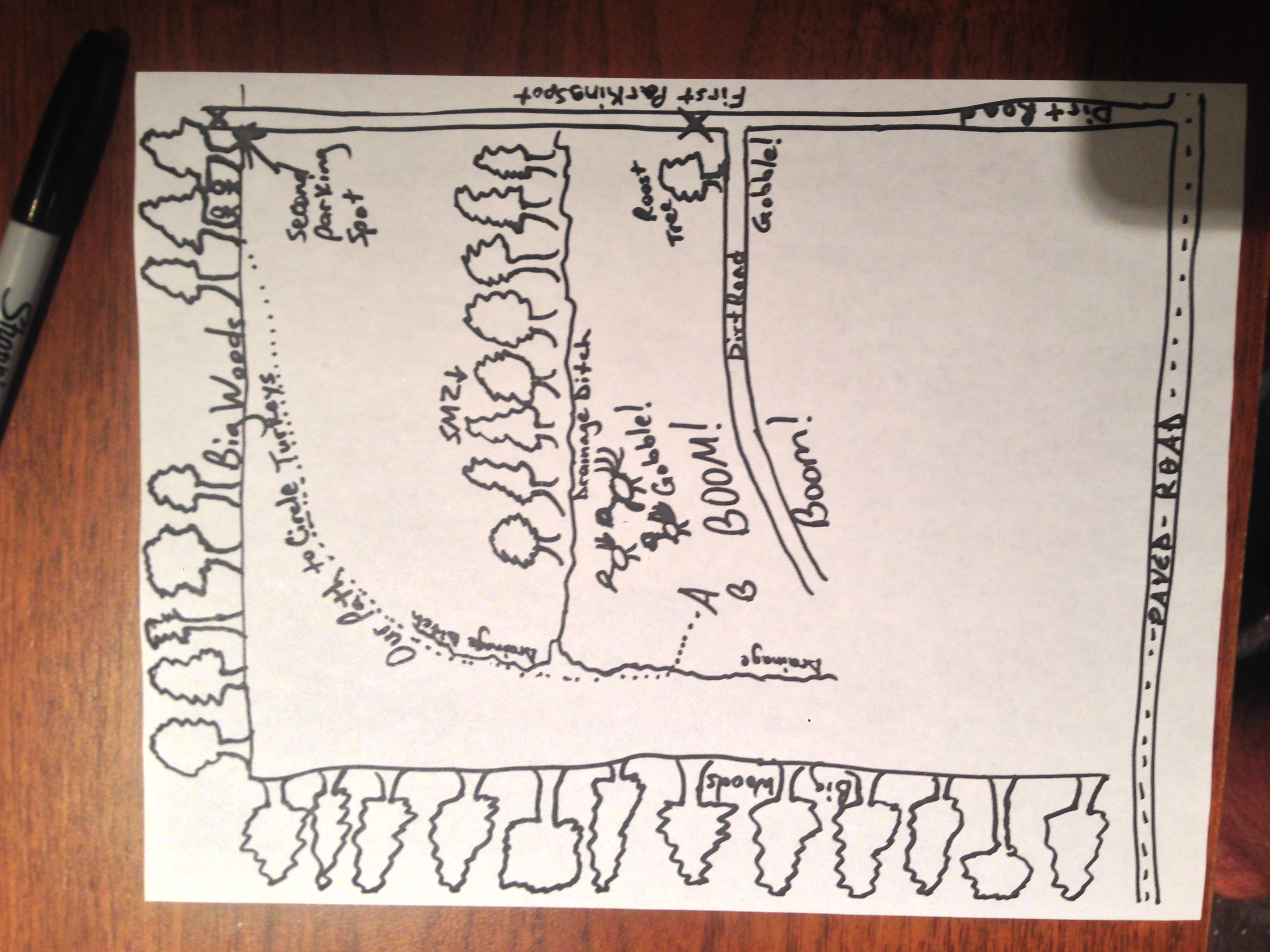 My second successful wild turkey hunt was a pretty fun hunt, and it makes for a pretty funny story too.  I figured I’d share it with you today, so here it goes…

I was living in Tuscaloosa, AL after I graduated from The University of Alabama (Roll Tide!), and I was working for a small mortgage company there at that time.  It was spring break; and all of my buddies, who were smart enough not to graduate from college in 4 years like I did, were out of school for the week while I was working.  I talked to my friend, Brian, one afternoon, and I told him that I wanted to go turkey hunting one morning that week before work.  He said that he knew where a couple of birds were, and that we should go the next morning.  So, I asked my boss if he minded if I came in late to work the next morning, and he said that was fine with him.

So, the next morning, Brian and I loaded up in his Toyota pickup truck and headed west towards Greene county.  On the way to the property we were hunting, Brian told me that he’d chased a gobbler on this particular piece of property a couple of days before and that he thought he knew how we could kill him.

We pulled into the property on a dirt road just about the time you could see dawn’s crack, stopped the truck, and eased the doors closed.  Brian hooted… nothing!  He hooted again… nothing!  We stayed in that spot for about 5 minutes hooting and hearing absolutely no turkeys anywhere.  As it was getting more light, I could see that the timber on part of the property we were hunting had recently been cut, and the road we were on continued into standing timber ahead.

We left the truck where it was parked, and we circled around the turkey and into the fresh cutover.  We stayed low in a shallow draw until we got to the same ridge the turkey was on, and we then crawled up to the top of a ridge about 150 yards from where the turkey last gobbled.  Now, the top of this ridge looks like a nuclear bomb went off there just days before.  There are tree limbs, logs, and debris all over the ground, and there are no trees anywhere on the ridge we are on.  Brian eased ahead of me and spotted the turkeys.  Yep, there were three turkeys together out in the cutover that morning.  At that point, the game plan changed just a little bit.

Brian told me to sit against one of the many tree trunks the loggers left on the ground.  As I was getting into position, he told me to shoot the first turkey I see and not to move after I shoot.  He then crawled off somewhere not too far behind me.  (Brian and I hunted together at least a hundred times before this hunt, and I had no reason to feel unsafe with this setup).  I didn’t realize it as I was getting set up, but the downed tree I selected to sit against was in a very shallow depression.  I couldn’t see anymore than about 10 yards in front of me because of the way the ridge dropped off in front of me and the fact that I was sitting in a low spot.  But it was too late to move now as the turkeys were coming toward us rather quickly… gobbling the whole way in.

So, I’m stuck there in what I would consider to be the absolute worst spot that I could be in.  The spot I selected probably turned out to be the best spot I could be in because not only were the turkeys invisible to me on their approach, but I was invisible to them as well.  I knew the turkeys had to be getting close, but I had no idea of where they were and what they were doing since I could not see them.  After about 10 minutes, a turkey head popped up over a log laying on the ground in front of me.  The turkey head disappeared just as quickly as it popped up, and I quickly moved my gun so it pointed where the turkey head was.

About 10 seconds later, a turkey head popped back up over the same log, and I squeezed the trigger on my shotgun.  The turkey disappeared, and I didn’t move.  About a second and a half later, Brian shot, and I still sat there motionless wondering if I killed my turkey or not.  A few seconds later, Brian called out to me, and I answered him asking if it was OK for me to get up.

Once I got the OK from Brian, I stood up and saw my turkey laying on the ground about 25 feet from me and Brian’s turkey on the ground about 20 yards away from me.  I turned around and Brian was standing up about 15 feet behind me with a huge smile on his face.  Since I had an extremely limited view of everything, I asked him what happened.  He said he didn’t know because he was laying down behind a log, and that he stood up after I shot and saw two turkeys leaving the scene.  He picked one out and shot him.

We stood there talking and taking everything in for a couple of minutes, and then we walked over to pick up our turkeys.  We killed two jakes, and the longbeard was the one that got away.  We couldn’t help but laugh because of the way the whole hunt played out.  We were both relatively new to the sport at the time, and any turkey was a trophy at that point.  We carried our birds to the truck and relived the hunt over and over again on the 45 minute ride back to Tuscaloosa.

We had a great hunt that day, and that hunt is one of only two doubles that I have been a part of in my turkey hunting career.  My dad has always said, “I’d rather be lucky than good any day!”  That day Brian and I both were definitely lucky instead of good, but if you think about it doesn’t it take some luck to kill a turkey on any given day?  You can be the most skilled turkey hunter around, but so many things beyond your control happen in the woods to spoil a hunt that you have to have a little bit of luck on your side to find success.

On a side note, that day is when I decided to go back to school to be a professional full time cartographer.  I earned that degree at the Alabama Polytechnic Institute/East Alabama Male College/Agricultural and Mechanical College of Alabama.  I also attended the University of Tennessee in an educational co-op, where I earned a minor in Art.  As you can see from the image above, I have excelled at my new found career as a professional cartographer/artist.  Thanks API and UT!